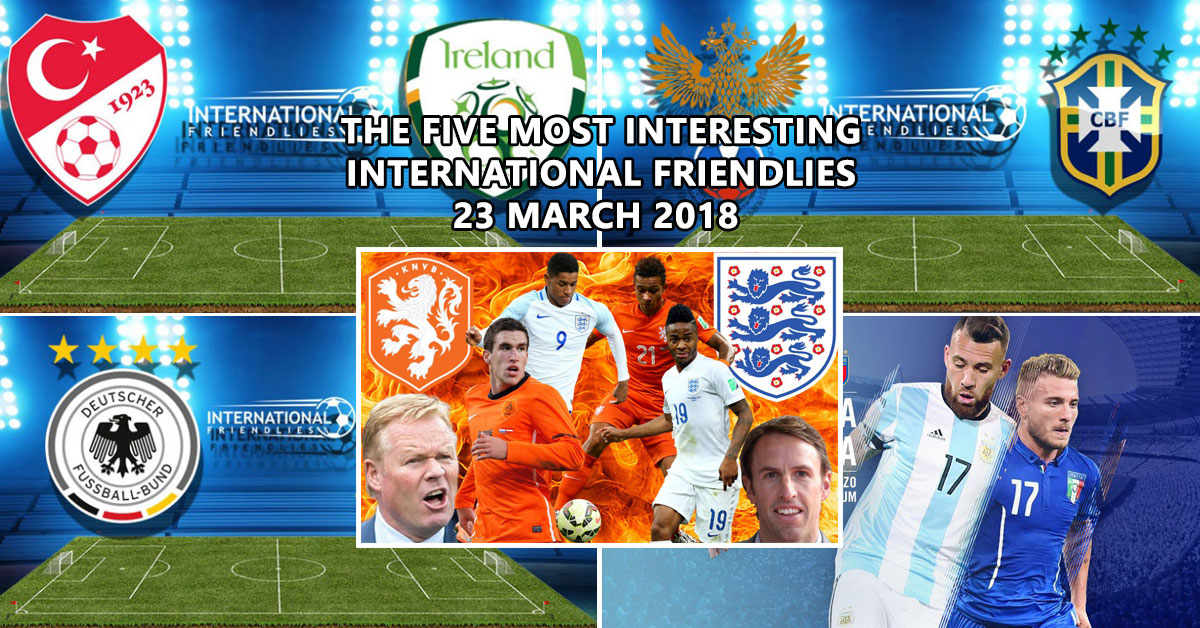 With less than 100 days before the World Cup in Russia, the participating teams will have the chance to test themselves against other countries with the players switching their attention from club football. Some debutants will have the chance to impress their managers, other will try to cement their place on the squad and will be hoping to get the plane tickets for this summer’s biggest sporting occasion. What better way to do so if not by starring in an eye-catching international fixture. We’ve got you covered by selecting the 5 most entertaining friendlies on Friday, 23th March.

The Netherlands vs England

When it comes to international friendlies between two of Europe’s top nations, the match between Netherlands and England comes at the top of everyone’s list for this weekend. Gareth Southgate will try out some debutants in the encounter in Amsterdam in a bid to spur great competition for the 23-man squad. The Dutch from another side will want to put behind them the disappointing campaign which saw them failed to qualify for a 2nd consecutive major tournament. Ronald Koeman will make his debut as a national coach as he is facing some major problems: retired from international football major players, a “lost generation” of Dutch players & issues with the Eredivisie. Since the third-placed finish at the 2014 World Cup under Louis van Gaal, Guus Hiddink, Danny Blind and Dick Advocaat have all failed. Hiddink left with their Euro 2016 qualification campaign in disarray, Blind was unable to turn it around, and their efforts to reach the upcoming World Cup went the same way under Advocaat. Virgil van Dijk will captain the new looking side with Justin Kluivert (Patrick’s son) will make his senior bow. England will have new faces coming in – Joe Gomez, James Tarkowski, Alfie Mawson, Harry Maguire and Lewis Cook. With more than 5000 English fans backing their side from the stands, the match will be a must watch for everyone.

Turkey vs the Republic of Ireland

Turkey entertains the Republic of Ireland in Antalya in what could be an international debut to up to 8 Irish players. O’Neill, who has stayed on for a third tournament despite a 5-1 aggregate defeat against Denmark in the playoffs for the World Cup, has selected a squad with a blend of youth and experience for Ireland’s only game until May. Aaron McCarey, Kieran O’Hara, Matt Doherty, Declan Rice, Darragh Lenihan, Derrick Williams, Enda Stevens and Scott Hogan have all been handed the chance to compete for their first caps as O’Neill prepares to lead the Republic of Ireland into the qualifying campaign for Euro 2020 – having reached the last-16 of the previous tournament. Turkey finished fourth in their World Cup qualifying campaign and will hope to breed new hope to their supporters by starting the new era with a win. Mircea Lucescu was appointed as head coach last August and will be hoping to add more glory to his glamorous career in his first job as a national manager. He has vast experience when coming in managing in Turkey being in charge of both Istanbul giants Galatasaray and Besiktas, before moving to Shakhtar Donetsk. His success will be determined by the performance of the star players – Hakan Çalhanoğlu, in-form Everton striker Cenk Tosun (who will miss the game against Ireland) and experienced Arda Turan, who returned home after a disappointing spell in Barcelona. 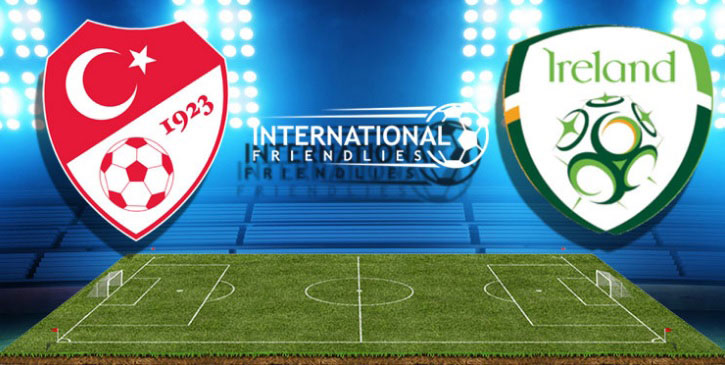 World Cup hosts kick-off their preparation campaign against two of big favorites to win the tournament – Brazil and France on Tuesday. Stanislav Cherchesov is leading the Russian national team and is expected to have heavy expectations on his shoulders to deliver group passing at least and playing many games in the elimination phase as possible. His recent squad is full of debutants or less experienced players with exceptions to the stalwarts Igor Akinfeev and Yuri Zhirkov, so the results in these two fixtures will not be that important. Russia failed to qualify for their 2017 FIFA Confederations Cup and largely disappointed. Brazil will be without their main man Neymar as he is facing uphill battle to be fit for this summer’s tournament after receiving a long-term injury. Dani Alves is the most experienced player in the squad and he will lead from the back, along with his club teammates Marquinos and Thiago Silva. Roberto Firmino is being branded as the complete center forward in recent weeks by various experts and he will be more than happy to reunite with his former Liverpool colleague Phillipe Coutinho. After impressing in the Champions League, Shakhtar’s stars Ismaily, Fred and Taison received call-ups for Selesao and will be hoping to impress. 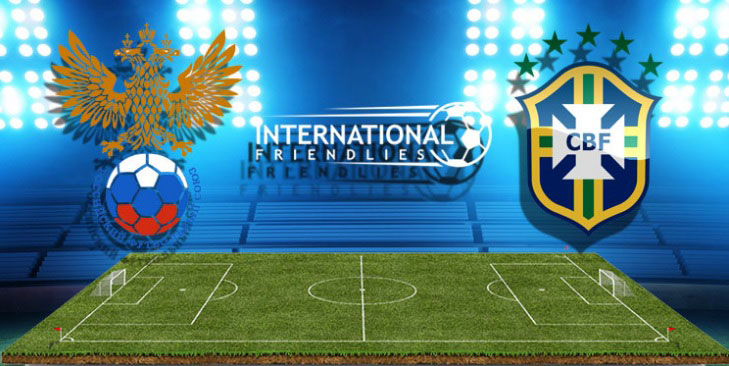 The Azzurri is facing Argentina in a glamorous tie in Manchester at City’s Etihad Stadium. This will be their first game after crashing out on the Play-offs against Sweden last year. The result meant that one of the most loved international sides will miss out the first major tournament in more than 50 years. The result also meant that Gian Piero Ventura lost his job and was succeeded by Luigi Di Biagio as a caretaker coach before finding a permanent replacement. The former Roma defensive midfielder is currently Italy U-21 coach as well. Italy will rotate and try out some less experienced players in the games against Argentina and England on Tuesday. Both fixtures being played away in England, the Azzurri will be away from the ever demanding Italian press, but make no mistake – their performance will be observed under a microscope. Argentina new manager Jorge Sampaoli confirmed that Etihad Stadium fan favorite Sergio Aguero will not be fit and will sit out on this game. Aguero injured his knee in training with Manchester City earlier this month and subsequently missed the 2-0 win away at Stoke. Sampaoli also praised the form of Manchester City defender Nicolas Otamendi, who has flourished under the guidance of Pep Guardiola this season. Leo Messi will captain his side and will earn his 124 caps for the South America nation in their preparation for the World Cup. Argentina next game will be against Spain on Tuesday. 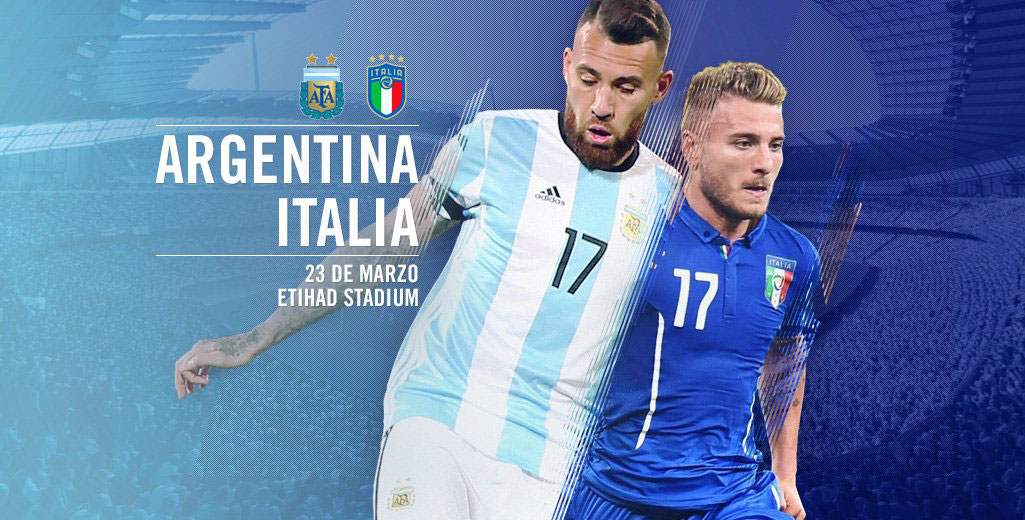 Germany is facing Spain in a classic encounter at the Esprit Arena in Dusseldorf. In July 2017, Germany won the 2017 FIFA Confederations Cup after a 1–0 win against Chile in the final in Saint Petersburg, it was their first Confederations Cup title and Joachim Löw will be hoping for a success this summer. He is facing a dilemma when it comes to certain areas of his squad – who to pick in goal with Manuel Neuer being lengthily injured and who will lead the attack – Timo Werner, evergreen Mario Gomez or Sandro Wagner. Toni Kroos, Mesut Ozil, and Sami Khedira will lead from the midfield area having won almost everything with the Bundes team. Julen Lopetegui’s La Roja is one of the dark horses as favorites to win the World Cup and Spain will have important games between now and the tournament because this will shape the 23-man squad. Chelsea striker Alvaro Morata was snubbed after a few months with injuries, but his club teammate Marcos Alonso will make his senior squad bow. With the World Cup on the horizon, Alonso has backed Morata to finish the season strong and win back his international spot.